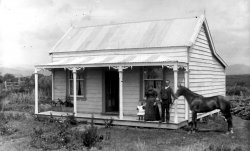 Built in many New Zealand settlements between 1922 and 1929, they look very different from bungalows but share many construction methods.

Once the North Island main trunk railway line was completed in 1908, housing was needed for workers at railway depots along the line. In 1919 the Architectural Branch of Railways, led by George Troup, developed a scheme to mass produce architecturally designed houses, pre-cut in a factory in Hamilton. The factory was erected in 1921-22 and production began in 1923 using mainly timber from Railways-owned indigenous forests. Standard parts were cut, numbered, and marked for specific house types, and complete kit-sets for houses were railed to various sites around the North Island. The houses took two to three weeks to assemble.

Railways settlements sprang up in Frankton, Otahuhu, Newmarket, Taumarunui, Ohakune, Taihape, Marton, Milson, Moera and Ngaio in the North Island, and a few South Island locations such as Greymouth.

When the factory closed in 1929 over 1591 houses plus other buildings had been made, the majority in the period 1924-27. No further cottages of this distinctive style were built. 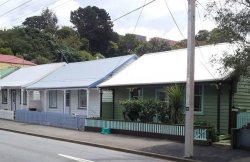 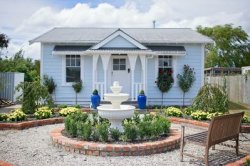 The Railways cottage essentially had a Georgian façade, but with the lower-pitched roof and exposed rafters of the bungalow. Though they looked very different from bungalows, construction was very similar.

The cottages had piled foundations and suspended timber floors. They used timber frame construction with bevel-back weatherboard cladding to the exterior and boxed external corners. Internal walls were sarked, as was the roof under the corrugated iron roofing.

Insulation: Railway cottages were generally constructed without insulation, and even with renovations over the years, are unlikely to meet current requirements. Where access is available we recommend insulation is installed to the ceiling space, subfloor and wall cavity.

Lead: Lead was used in external and internal paintwork, flashings, valley gutters, heads to nails and waste pipes. Lead-based paints were commonly used up until the mid-1960’s when the hazard it posed became more fully understood. The effect of lead is cumulative – it builds up in the body, leading to lead poisoning. In extreme cases it can result in brain damage or even death.

Even where a cottage has undergone recent paint renovations, there could be older concealed layers of paint, so care should still be taken. If in doubt we recommend testing for the presence of lead – kits are available from most hardware and paint stores.

Asbestos: All homes built prior to the year 2000 should be assumed to contain asbestos materials. In railway cottages, asbestos cement sheets were typically used to clad the gables. Asbestos containing materials become a health hazard when they are disturbed and the asbestos fibres are released into the air where they are breathed in. Unfortunately the danger is often underestimated because symptoms often do not appear until 15–20 years after exposure.

If you are intending to undertake renovations and suspect asbestos may be contained in the materials we recommend carrying out testing first. NZ House Surveys offers Asbestos surveying and testing services- contact us today for a quote.

Old wiring: In some cottages the original wiring may still be present. At the time of the railway cottage, cloth-covered, rubber-insulating sheath wiring contained in steel conduit hidden in the wall framing and ceiling spaces was used and this wiring deteriorates over time as the rubber insulation perishes and becomes brittle, posing a significant fire risk. Where this wiring is still present, we strongly recommend replacement. The presence of this wiring may also have implications on your insurance policy.

Exterior cladding: Railway cottages were constructed of a timber framing with weatherboard cladding – this cladding is susceptible to rot and borer particularly when maintenance has been deferred. Rotten weatherboards should be removed and replaced to prevent the spread, and the dwelling should be treated for borer regularly.

Scrim & sarking: Many older New Zealand homes, including railway cottages, have scrim and sarking lined walls. Scrim is a hessian sacking material which is fixed to horizontal planks of wood. The planks are fixed to the framing of the building forming the walls of the structure. Wallpaper or sometimes newspaper was then pasted onto the top of this to finish the wall. Over years of drying out the scrim and wallpaper become detached from the sarking. All three components of this structure are usually extremely dry and of course pose a very real fire risk. In addition, the sarking is usually infested with borer which causes vast quantities of dust to build up behind the paper making it a further fire risk. Due to this many insurers will limit the amount of insurance they will provide for these properties.

Foundations and subfloors: Many cottages that remain on the original piles have significant signs of decay and rot causing uneven floors. Re-piling should be carried out. Additionally some can have insufficient ground clearance, inadequate foundation bracing, and insufficient ventilation which results in dampness under the dwelling.

If you are considering buying a railway cottage contact our team of inspectors on 0800 487 884 for a detailed pre-purchase inspection report.