A guide to choosing, installing, and maintaining smoke alarms

In New Zealand there is a house fire approximately every three hours. These house fires move quickly and can consume a room in as little as 40 seconds, leaving little time for any occupants to escape.

Working smoke alarms can be your biggest protection – you are four times more likely to survive a house fire if you have working smoke alarms installed. However, it’s not enough to just have them installed; to work reliably they need to be the right type, installed in the right location and tested on a regular basis.

The recent changes to the tenancy Act reflect this; requiring all residential rental properties to be fitted with long life smoke alarms, within 3 meters of each bedroom door as of 1st July 2016. Landlords are responsible for installation of operational smoke alarms in their properties, and tenants are responsible for changing the batteries and reporting faulty alarms. Should the landlord choose to forgo their obligations, the Tenancy Act Amendments now give tenants and advocates the power to enforce these requirements.

The New Zealand building code also sets out clear requirements for all new homes, and existing homes which are being altered to have a warning system in place under clause F7.

Under Acceptable Solution F7/AS1 domestic-type smoke alarms with an integral alerting device are required to be installed in houses, townhouses, small multi-unit dwellings, and to permanent accommodation. These smoke alarms must have, a hush button so the alarm can be silenced for at least 30 seconds without cutting the power supply, a test button, and a sound pressure level in accordance with NZS 4514: 2009.

Below is a table based on the New Zealand Standard which shows recommended smoke alarm types for different rooms. 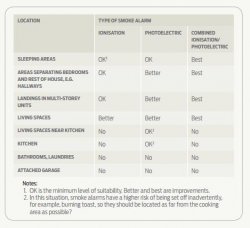 Installing smoke alarms in the right location is critical as incorrectly located smoke alarms can cause nuisance (such as the alarms going off when you cook dinner) or become ineffective.

The building code requires smoke alarms to be installed on every level of a multi-story dwelling and either, in every sleeping space, or within 3 meters of a sleeping space door.

It should be noted that the New Zealand Fire Service recommends smoke alarms in every sleeping and living space.

For optimum smoke detection, alarms should be placed on the ceiling or high on the walls avoiding dead air spaces such as corners and areas close to exposed beams or other obstructions. 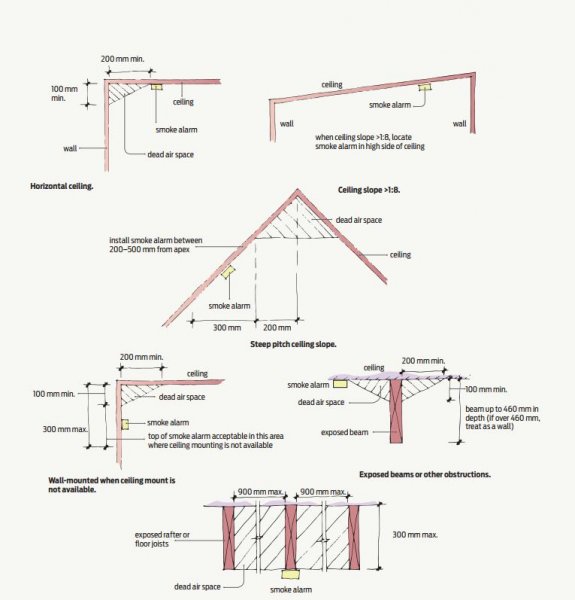 Other areas to avoid installing alarms in, include:

The New Zealand Standard 4514:2009 sets out testing requirements for domestic smoke alarms. These include monthly testing using the test button to check power supply and sound and 6-monthly inspection and cleaning using a vacuum cleaner and brush to remove dust and dirt that may have entered the device. Annual testing of the smoke detecting element is also required by use of a joss stick or commercial test smoke.

For a report on your rental property including the smoke alarms, call one of our friendly inspectors today on 0800 487 884