Homes constructed using a variety of plaster clad system including solid plaster, Harditex, or polystyrene systems are commonly referred to as monolithic. Houses built particularly between the late 1980’s and 2004 are more susceptible to weather tight issues and are typical of those that were known to cause the ‘leaky building crisis’.

In New Zealand, it is a legal requirement for real estate agents to notify prospective purchasers if a property is a monolithic clad home, and to recommend obtaining advice concerning the integrity of the cladding system. Sadly, this is often ‘forgotten about’ by agents in the industry and it is not uncommon for purchasers to end up with a lemon in their hands, stress in their heads, and a bank balance going south faster than Donald Trump’s popularity.

Often homeowners think because their house may feel warm, and they have no obvious signs of water leakage or dampness inside their walls they assume their house is watertight. Nothing could be further from the truth – often with a plaster monolithic home. Frequently these ‘lemons’ are on-sold with the previous owners knowing something of a problem, or a real estate agent not being forthright in disclosing potential issues or threats.

During the 1940’s – 1960’s plaster clad homes were generally well constructed, flashed and finished and provided maintenance was kept up performed reasonably well. Over the coming decades many plasterers either retired or transitioned into bricklaying in the 1970’s and true plasterers became as scarce as hen’s teeth.

Enter the 90’s with changes in architecture and the ‘Miami Vice’ look with monolithic plaster, square shapes, parapet designs, and flat roofs. To complicate these design features balconies were added, so called architectural features were incorporated, and houses were built two and three storey with risky junctions and awkward detailing. New building products began to flood the marketplace to cope with the new demand, and a new wave of ‘self-taught’ plasterers entered the foray – both of which were partly responsible for the issues that are now well documented.

Every week, all over the country our inspection teams report on these houses, many of which failed when they were built, and most of which continue to fail in some way today. Our inspectors are well versed in inspecting monolithic clad homes and carry the latest electronic technology to conduct both non – invasive moisture readings, and percentage based readings using probe based moisture meters.

Unfortunately, many monolithic homes have had weather ingress problems since they were constructed, been left largely unchecked and with minimal maintenance many of these houses now require recladding and significant remediation of rotten timber framing. Generally, owners of these properties can start by writing a cheque in the vicinity of $150,000 - $200,000; with many re-clads moving significantly above this amount.

It can be an expensive exercise and agonising process for many homeowners with stresses resulting in marital dissolution, and family health problems from the black toxic stachybotrys mould associated with rotting timbers.

Often the vendors of these homes obtain a ‘friendly’ building inspection from an ‘independent’ building inspection company -often recommended by the agent selling the property. Unfortunately for the purchaser many rely on this information and only find out months or even years afterwards that they have brought a ‘leaky home’ with weathertight issues needing remediation.

Don’t be fooled into buying a monolithic home without demanding the best! Contact NZ House Surveys for your pre-purchase inspection to ensure it is meeting the functional requirements of the Building Code. We’re available today! 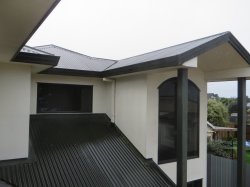